BBC Press – To The Ends of The Earth 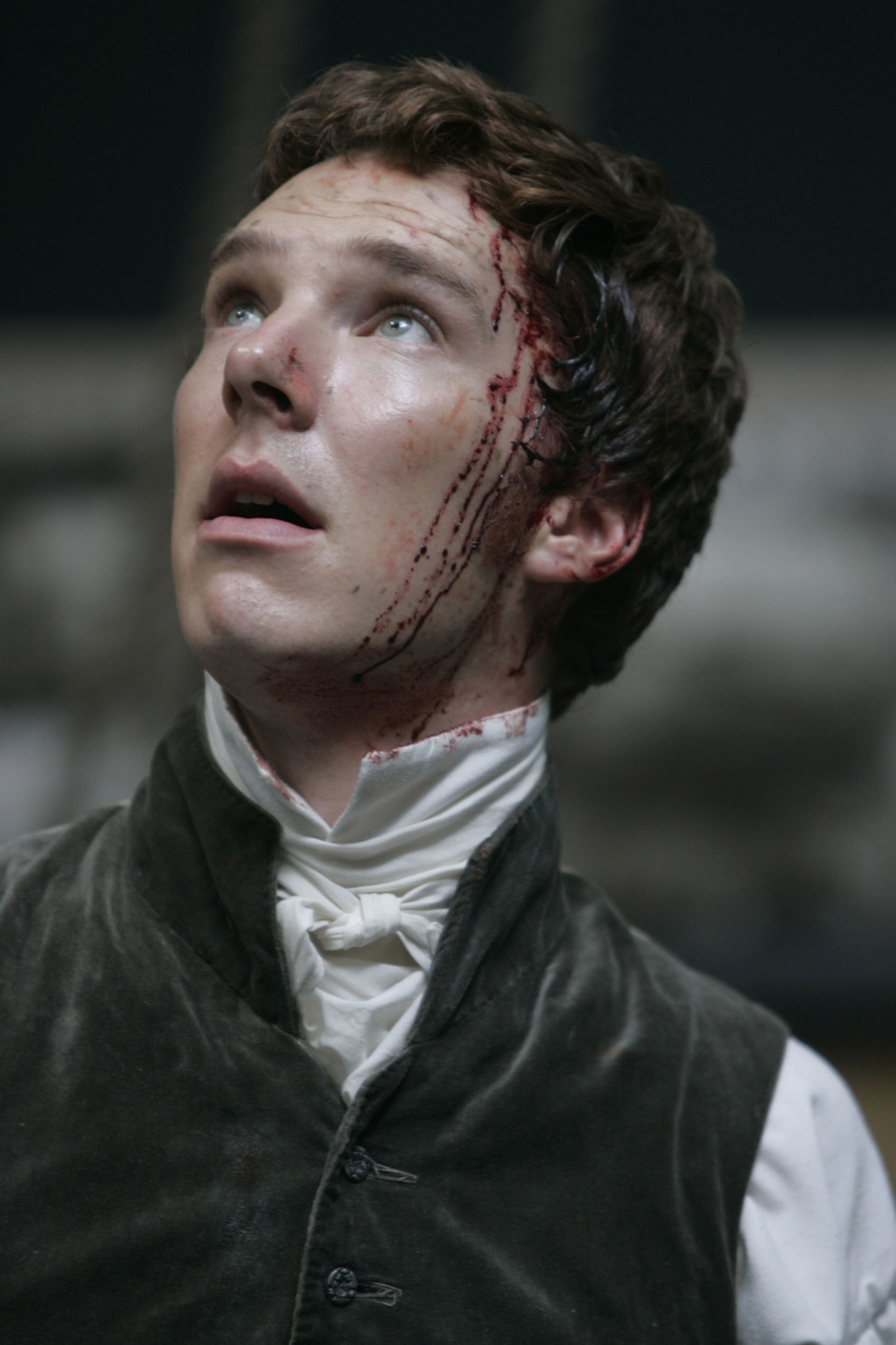 Benedict Cumberbatch sums up To The Ends of the Earth very succinctly: “It is a sort of rock and roll 1812 period drama about a young man’s gap year. It’s full of filth, dirt, discovery, sex, drugs, dancing, love, spiritual awakenings and massive sweeping changes!”

Taking on the role of Edmund Talbot was a huge undertaking for Cumberbatch, who received enormous critical acclaim for his performance last year as cosmologist Stephen Hawking in Hawking, and a well-deserved Best Actor Bafta nomination in the process.

He appears in virtually every scene in To The Ends of the Earth, and was on set every day, throughout the whole four-month shoot, on location in South Africa.

“Every day was so different and ultimately that was the greatest gift of this job. The hours were exhausting but each day was a new challenge. I loved hurling myself round that boat on ropes, bits of rigging falling around me in flames, with the contrast of filming the intimacy of the cabin scenes.

“Edmund Talbot has a massive learning curve throughout the three books. The scripts are fantastic and I always brought the books on set as a reference point. Edmund is incredibly confident, a little bit arrogant, vulnerable and always open to learning.

“He’s very much a product of his time and class. An establishment figure, he has all the airs and graces of his social position. He’s full of ambition, wilful, always thinks he’s in control and he’s permanently confounded. He’s moody, neurotic but he’s got a good sense of humour.”

Edmund Talbot’s social position is something that Cumberbatch can readily identify with, having been sent to Harrow, one of the most prestigious boarding schools in the UK.

“The upbringing I had was a privileged one, but by default. My grandmother paid for two thirds of my fee, so I was a very middle class kid by most standards. I was surrounded by Lord Rothschild’s son, Prince Hussein’s son, dignitaries, princes and peers left right and centre.

“That is not to be critical of it, but the assumption of authority and position that these people are born into was something I immediately identified in Edmund.

“But I was very keen to make him sympathetic. I didn’t want him to be just someone who was a product of his class, but more a fully rounded three-dimensional human being. Golding’s books expose him at every single level as a fallible young man.”

Golding’s books provided invaluable source material for Cumberbatch to get under the skin of his character, to the degree that by the end of the shoot his fellow cast members were calling him Edmund and not Ben.

One great challenge he had to face during filming was the shooting of his first-ever on screen sex scene, with actress Paula Jennings, playing the luscious Zenobia.

“My on-screen sex technique is not perfected but I hope it worked! In the book, Edmund knows what he’s doing and maybe that’s him writing himself up in his journal as a bit of a lothario, but I imagine that rather like others of his ilk his father had probably given him a chambermaid or prostitute to initiate him.

“He behaves with Zenobia like a sexual animal: he’s very avaricious and knowing. He’s charming and flirts with her from the first day he sees her and he goes straight for the kill.”

Filming in South Africa proved to be as much of a Boy’s Own adventure for Cumberbatch, as life was for Edmund on his way to the new world.

“Outside of the filming we had the most extraordinary time. I promised myself on New Year’s Eve in 2003 that I had to take things up rather than give them up.”

The African continent provided plenty of opportunities. “The cast had great fun together. We had poker nights, beach parties, dune buggying, horseback safaris. One weekend we went to a game reserve called Phinda, where we were treated like royalty and had our own cook.

“It was really posh, and the most expensive treat I gave myself during filming. I then learnt to scuba dive in one of the most beautiful places on God’s earth, about a three-hour drive from where we were filming.

“I’d already been whale watching, but on my second dive I swam with a whale, who was about ten feet away from me. It was magical, the most beautiful sight and it had a baby whale swimming by its head.

“When I finished filming in Cape Town I went swimming with great white sharks. I was in a cage and they were fed just beside us. It was terrifying and wonderful – they are such a potent force of nature.”

After filming he headed for Namibia, wanting to be in a dry hot and arid climate after four months on a boat. The airport for remote Windhoek, where he ventured, was literally marked out with pebbles. Half an hour after arriving, Cumberbatch was back up in a plane, this time with one propeller, about to do his first sky dive.

“When you freefall for 7,000 feet it doesn’t feel like you’re falling: it feels like you’re floating, a bit like scuba diving. I was strapped to an instructor and when we took off out of the plane I thought, ‘I’m either going to be landing very softly or hurtling towards my death’. I couldn’t stop screaming – it was an incredible experience.

“I did a really touristy thing and I got a video made of my jump. There is an unflattering film of me, double chin flapping around my ears, going through the G-Force and going ‘oh-my-God’ – and a lot worse!

After a night sleeping under the stars amongst the red sand dunes, he did do another jump and then took the Namibian equivalent of the Orient Express.

“I’ve been kayaking and white water rafting when I was in India. This really re-awakened my sense of just having fun with your body in nature.”

As with Edmund Talbot, when Ben was at school he enjoyed his own gap-year experience. “I was very lucky. Even though I wasn’t as rich as other people, there were loads of boys in similar positions to me at Harrow.

“There were those who were super rich and went off on their holidays to Aspen, and I’d go and see my grandmother in Brighton. There was a disparity in what we could afford to do on our holidays.

“I had a real yearning to make use of the opportunities I had at school. When I heard about the gap year of teaching English at a Tibetan monastery, I knew I had to do something about it really quickly otherwise it was going to get allocated.

“I was very decisive. I worked for six months to drum up the finance as it was voluntary – there was no income. I worked in Penhaligon’s the perfumery for almost five months and I did waiting jobs.

“The monastery was a fantastic experience; you lived your life by very limited means, although you were given board and lodgings. While I was there some of us went to Nepal for two weeks and did white water rafting and we camped out under the stars.”

Following his spectacular gap year, Cumberbatch went to Manchester University, where he began a long-term relationship with a fellow student. Just prior to Benedict going on the four-month shoot to South Africa last July, his girlfriend delivered a bombshell.

“My break-up was completely out of the blue” he says. “I had been very nervous for us because of where we were in our relationship and because I was going away for such a long time. It was a cause for anxiety but the actual break-up itself was a big surprise. That heartbroken feeling was painful and I thought ‘I have to be resourceful’. I was so buoyed up by the people around me in South Africa – they were family.”

Family is very important to Cumberbatch. His parents, actors Tim Carlton and Wanda Ventham, were not keen on their only son following in their footsteps.

“They said, ‘Don’t do it because of us’,” says Cumberbatch. “I was lucky to see the best and worst of the world, how it wasn’t a secure profession, how it depended very much on age, sex, and fashion.

“I did lots of acting at school. My first part was as Titania, queen of the fairies, which, being at an all-boys boarding school was a bit embarrassing. Luckily I was in the rugby team, so I was macho at the same time!”

A turning point came for the Cumberbatch family when Tim went to see his son in the play Glengary Glen Ross while he was at university. “My dad said, ‘I think you could do better at this than I’ve ever done and I’d really love you to do this.’ We were both crying; it was an incredible thing to say.”

Hailed as a rising talent and with one Bafta nomination under his belt, Cumberbatch’s star looks set to rise and rise.

“I’ve been very lucky at what’s happened in my career to date, but playing something as far from me as possible is an ambition of mine – anything from a mutated baddy in a comic book action thriller, to a detective. If anything, I’d like Gary Oldman’s career: he’s the perfect example of it. I’ve love to have a really broad sweep of characters – to be able to do something edgy, surprising and unfashionable.”

Next for Ben, following his current success in the critically acclaimed production of Hedda Gabler, which has just transferred from the Almeida Theatre to London’s West End, he is developing a film with a friend, in which he will play a pair of twins.

He concludes: “I love to paint as well and I’d love to write, but right now I’m concentrating on acting.”