Benedict discusses ‘The Courier’ with HeyUGuys

The Courier hits the British cinemas this coming Friday (August 13). Benedict has spoken with HeyUGuys about it, as well as the latest and the upcoming MCU phase 4 projects:

With his new film The Courier finally due out in UK cinemas this week, we had the pleasure of catching up with star Benedict Cumberbatch to discuss the new thriller that shows an important part of history that we – and many more, we suspect – would not have been aware of before.

The Courier sees Cumberbatch star as British businessman Greville Wynne, unwittingly recruited into one of the greatest international conflicts in history. Forming an unlikely partnership with Soviet officer Oleg Penkovsky (Merab Ninidze) hoping to prevent a nuclear confrontation, the two men work together to provide the crucial intelligence used to defuse the Cuban Missile Crisis.

Like us, Cumberbatch himself had no idea about the story of these two men but, as with other roles he has taken on, that was part of the mystery and why he signed on.

“I think my parents might remember it but I shamelessly knew nothing about it, but that’s great,” he said. “That’s why these stories need to be rediscovered, confronted. I think we’ve been living in an extraordinary time where ordinary people have done remarkably brave things so there’s a resonance through the culture at the moment. He was just a very ordinary man – he came from a Welsh, pretty impoverished, background, his mum was incredibly socially and wanted the best for him and their lot. Severely dyslexic to near illiteracy but the gift of the gab got him his business.”

Wynne, an electrical engineer who trained at the University of Nottingham, was very much a fish out of water taking on the assignment laid in front of him by MI6 and Cumberbatch tells us that a big part of his lure to the film was the unexpected nature to it and that, ultimately, it was the story of an unlikely friendship that kept both men alive when the going got tough, saying:

“Not in a million years did he think that that would then lead into Russia and lead to this fulcrum of information and being part of this pivotal moment in the middle of the Cuban Missle Crisis. So the hook of the character for me is how he goes from zero to hero in such an accelerated and extraordinary amount of time. And that fact that he couldn’t have a team in place to support him, you know, he’s on his own, on the ground, all the diplomatic channels are flowing back then. But it was all about this friendship with Penkovsky, the only other person who could share and console and berate and support was this man who agreed to that career information from.”

Of course, when Wynne was courier for Penkovsky, he had no idea what impact their actions would have on the Cuban Missile Crisis, with many political battles happening all at once. We have seen plenty of films take on that fraught part of history, Cumberbatch reiterates that despite the tense goings-on, it was secondary to these two men’s friendship, adding:

“The bigger picture is in the background, it’s a backdrop to the character-driven drama about a friendship between two very unlikely people. A Russian general whose father was discovered to be a White Russian during the Civil War and therefore his career got stagnated at the KGB. And while there was a lot of egos involved and he was disgruntled about his lack of progress, but he also believed in development, he believed in a different form of Soviet dominance. And I think he was persuaded that they were both doing something to create a safer world for their families and to find that common ground between the backgrounds… That’s all it takes, for us to reach across our differences and strike up some kind of a chord and an understanding, and that we’re stronger together. And, yeah, friendship is what they come up with.”

In his career thus far, Cumberbatch has taken on many vast and differing roles, from Alan Turing in The Imitation Game, Dominic Cummings in Brexit: The Uncivil War, Julian Assange in The Fifth Estate and, of course, Dr. Stephen Strange in the MCU, and the actor admits he enjoys the variety as it helps him learn about subjects and worlds he didn’t know about before and dealing with the truth as much as possible, saying:

“Very much so, it’s like my further education is continuing,” he said. “I’m constantly exploring new worlds and realities and points in history or societal change and seeing patterns that are obviously relevant, you know, to point out that there is a reason why I will tell you this story, and have some cultural relevance, despite how different our times are to the moment that occurred. And I think that’s the interesting thing. It’s not reappropriating or reinterpretation of history in the way that a revisionist version like Tarantino’s take on Sharon Tate murder or Nazi hunters. It’s not that full licence to go that far. But it’s also not just documentarian reverence, there’s still an element of editorial framing of the story is dealing with plain facts. So you go into and you lean into a project and, I tend to lean into that the era, costume research, and the research in every department but also the script itself, the source material, and any reason I think around it because what a great opportunity to really do that.”

In terms of Wynne, Cumberbatch said that he enjoyed playing the “other” side of espionage, dealing with the people that are the silent heroes that, any other time, may not be the focus of a film, adding:

“That’s all he has to do in this version of spycraft, it’s not you know, guns and bombs and sailing across the boats, cars and getting the girl like in a Bond movie. It’s very much living on your wits in a very fresh environment. And yet, he does actually has the ability to do it not just because he’s unexpected as part of the diplomatic and therefore not going to be an immediate source of conservative KGB. He was able to adapt like a chameleon, he has to roleplay.”

Of course, we couldn’t let him go without trying to get some juicy new information about the MCU post-Loki and WandaVision – including his roles in Spider-Man: No Way Home and Doctor Strange in the Multiverse of Madness, and while he was as coy as ever, he is excited by the future and the amount of content that is forming part of Phase 4, saying:

“It’s even more interesting because there’s so much content out there that the curiosity levels are huge because there’s a lot of content and I think that’s good. It keeps people “fed”! So, of course, there’s intrigue and of course, I’m not going to say anything about it other than it was a riot, I mean the clue is in the title – It was bonkers and continues to be bonkers and so excited. And I love the fact that with Marvel it’s never over – even after the premiere of Avengers, it’s never over until it’s over.”

Also, as this took place mere days after the Loki series finale, is he up to date?

“I am only three episodes in so I have to catch up – Richard E. Grant hasn’t appeared yet!”

GALLERY UPDATE: ‘The Mauritanian’ and ‘The Courier’ screencaptures 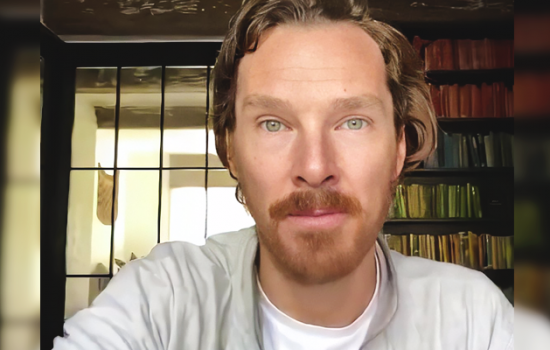 Benedict talks ‘The Courier’ and life on quarantine during COVID-19 with Tatler Hong Kong
‘The Courier’ gets date release and new stills
Previous Post Benedict appears as guest on ‘The Late Late Show with James Corden’
Next Post GALLERY UPDATE: ‘The Mauritanian’ and ‘The Courier’ screencaptures