He also had a few words to say about upcoming Doctor Strange in the Multiverse of Madness. Read the interview below:

The weird thing about interviewing Benedict Cumberbatch is he’s hilarious. And it’s an easy thing to forget because he’s not exactly known for making uproarious comedies. But during an interview, he’ll wait for his moment to strike with just the right amount of sarcastic wit and, well, it gets me every time. (On this occasion he wasted very little time.)

Though, on this occasion there was a slight sense of frustration radiating from his usually cool demeanor. And, honestly, it’s understandable. Cumberbatch is starring in The Courier and he’s pretty fantastic in it. It’s a role you can tell Cumberbatch put his heart fully into, going as far as to lose a dramatic amount of weight to portray the real-life Greville Wynne, a British businessman who was enlisted by the government to spy on the Soviet Union during the Cold War. (If you look back at photos of Cumberbatch from late 2019, he’s impossibly thin, representing Wynne after he was released from Soviet custody.) Yet, this is a movie flying under people’s radars. Cumberbatch is diplomatic about the whole thing, but, yes, it’s obvious he really wants people to see this movie and he’s got a really good case.

Also, as we were literally out of time, I asked Cumberbatch if we could just cut to the chase and he could say something hyperbolic about Doctor Strange in the Multiverse of Madness and the, again, always hilarious Cumberbatch did not disappoint. But, first, he asked why my Zoom video wasn’t working.

Honestly, I don’t have a good background and I’ve given up on the whole thing.

It’s alright. We all know you’re naked, it’s is absolutely fine. Don’t worry about it.

At one point I thought about putting a big poster up of whoever I was talking to behind me to see if they’d bring it up, but I never did that.

Life is too short, so don’t beat yourself up either.

See, you always catch me off guard because I always forget you’re hilarious. And it usually involves cuss words.

That’s cool. Thank you, Mike. I’ll try to be fucking funny this time too.

See. And the last time we spoke it was for The Grinch and you kept using phrases like “Grinchy” with cuss words. Combine the two, it’s very funny.

There must be an adult version waiting for me out there somewhere to play the Grinch. It’s like Bad Santa or something. It’s a market that Billy Bob Thorton cornered for a while. But I think the time is right for an angry Christmas movie.

I really enjoyed The Courier. I am curious, when someone initially comes to you with a spy movie, is your initial reaction, “Come on, I was in Tinker Tailor Soldier Spy?

For me, the hook here was just the one about the character. It was Dominic [Cooke] who I’ve worked with before, who I wanted to work with again. And we’d been looking for a project for a while and he beat me to it. He directed me in Richard III.

Well, I’m glad you read this one.

Well, Dominic came and pitched it to me. I was like, this is an extraordinary story, an unknown character. The least likely candidate for a spy film. This will be a different version of the ticking bomb spy thriller genre. It’s not your usual starting point to have a charming, but highly dyslexic, to the point of near illiterate, businessman. There’s nothing James Bond about him. You look him up and the comparative between him pre-spy and post-release, which we’ll talk about in a minute, is physical transformation. There’s very little known about him.

What you just said is dead-on when I was watching this. You don’t know how it’s going to turn out. At least I didn’t and it doesn’t go the way you think it’s going to go. It’s not such a famous story where a person knows this already.

What I meant by that was I bet you get pitched spy stuff all the time.

Not all the time. I said no to a few, so maybe you could get the idea that I’m not super keen to do it all the time. It’s really “for me.” My choices are based on who I’m working with, whether they can get me there and challenge me, and ask of me things I haven’t done before. And, whether the character could do that as well.

You mentioned we’d get to your character’s transformation, meaning weight loss. I take that as a lot of people were asking you about that.

The most cursory glance at him on the internet, you’ll face images, a very portly middle-aged spread of a man, who’s comfortably coasting towards early retirement. He’s got a round face, and he fills his suit, and he looks very healthy on one too many pub lunches. Then you cut to him being released in the same clothes and he’s absolutely lost in them. They are huge on him. He’s this shrink-wrapped skeleton, sort of. He looks like a hunted animal. Haunted and destroyed.

Did you do lose weight or is that movie magic?

No, I did that. We took three months off production. I took it very seriously and lost weight and exercised. A lot of exposure to cold. Then, obviously, the dietary thing as well, especially near the end. Apart from honoring his legacy, by showing what he endured, it also really helps you to put you in a place of vulnerability and weakness and confusion and disorientation. That being: that sort of calm, deprived, and weak, it mostly makes you very available and vulnerable. That was a small window into what he must have endured for months, if not years.

Well, it seems like when you put this film in front of people, people really like it. You obviously threw yourself into this. You lost all that weight. I’m wondering if, and I don’t really know the word, maybe frustrated, that it feels like this is like flowing under the radar a bit and it shouldn’t be. I know what happened in the world has a lot to do with that.

I mean, I think a lot of things that played into that. I think it’s going to find its place. It’s frustrating that the release is delayed and obviously that’s the COVID of it all. I would want to talk to Lionsgate about that a little bit. They’ve got other things in competition and it’s all those politics. To be honest, you just sort of push all that aside. And you just go, I’m really happy this film’s coming out. I’m really, really, really happy with the way people have responded to it. I don’t think my work’s been wasted. I don’t have to be standing somewhere giving an acceptance speech to feel that my work’s been validated. I really don’t. I understand what you’re saying…

But the important thing is actually really to do with it being seen. That’s the thing I’ll have a lot to say about. If it doesn’t have the life it deserves because of everyone’s work on it, not just mine. To be honest, whether this was going to be a small TV drama, or a big film, or medium-size film that it sort of is, I suppose, it feels important enough historically. I think, especially in this time, it’s going to resonate. You’ve got countless examples of people stepping up to the plate who have no form of experience of what it’s like to live under a pandemic. We’re also being exposed to the truth of the backroom heroes, the people in the backgrounds of our lives that keep the whole thing going, whether they’re cleaners or delivery people.

All the conditions at the front of the health care crisis, the doctors and nurses, as well as the specialists working on vaccines. There’s this huge machine that’s trying to sort this. Not just that. All the political movements we’ve seen exploded over the last year and continue. Whether it’s the Black Lives Matter movement, or Me Too, and the global climate crisis movements. It’s just, the point I’m making… the positive message that it’s a celebration of someone who we don’t know that much about. We’ve seen a lot of that and we need to continue to do that within our culture.

We are out of time. But before we go, if you say something hyperbolic about the next Doctor Strange movie, people will come to this and read it. Like, “Oh, Doctor Strange in the Multiverse of Madness, you aren’t even ready for that?” Or just something like that and we’re off to the races and everyone will read about The Courier.

The multi-verse is going to twist your noodle into a pretzel in multidimensions in a way you’ve never experienced before!

[Laughs] Okay, if that’s how it works. 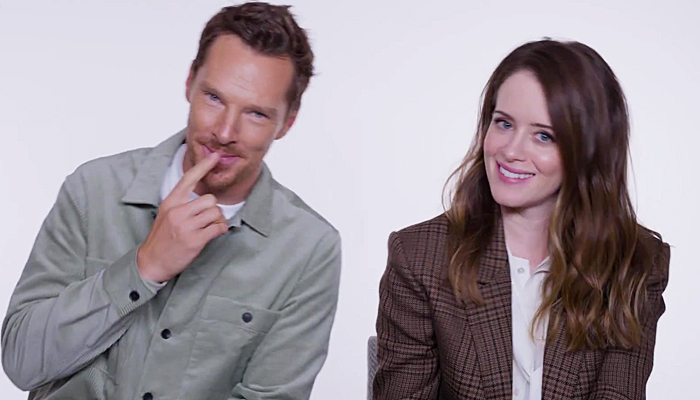 New interview for Screendaily about ‘The Power of the Dog’