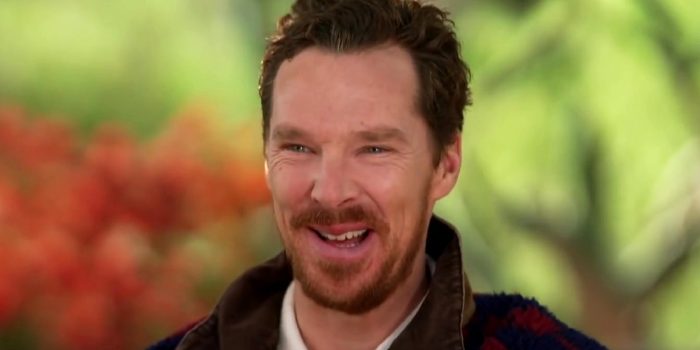 Watch below an interview Benedict gave to the CBS talk show Sunday Morning aired today, in which he talked about doing The Power of the Dog, his career and more:

Screencaptures from his appearance are available on our photo gallery:

Some bits of the interview were transcripted as seen below:

Benedict Cumberbatch: “What an amazing way to live a life”

In the new Netflix film “The Power of the Dog,” Benedict Cumberbatch is a cowboy in 1920s Montana who can ride, rope, and roll a smoke with the best of ’em. He’s also a world-class bully, who seems to take delight in tormenting some of those around him.

The movie is both a searing psychological drama and a meditation on toxic masculinity.

On the set, and with director Jane Campion’s encouragement, Cumberbatch also dug deep into what it meant to be a real working cowboy.

Correspondent Tracy Smith asked, “Did you fully embrace it, in that you did not shower?”

“Yeah. I mean, not for the whole shoot. That would be kind of dangerous, I think!” Cumberbatch replied. “I might have become a biohazard. But for a whole week and a bit at the beginning of the shoot, at the beginning of rehearsals, rather, I did, yeah.”

“Yeah. And that’s quite something in the 21st century, to just not wash.”

He also learned “a ludicrous number” of skills, including whistling.

For the record, he cleans up pretty well … and there’s talk he might also clean up at next year’s Oscars, which is no surprise to anyone who’s seen him on screens big or small.

The wider world came to know Benedict Cumberbatch from the 2010 BBC series “Sherlock.”

Smith said, “You went from working actor to famous actor in a span of, what, 90 minutes basically?”

But it seems that he’d been waiting for it all his life.

Born to a pair of working actors, young Benedict considered law school for a moment, before following his parents onto the stage. Cumberbatch said, “They gave me a very securing upbringing, and offered me every opportunity with my education, with their upbringing of me, through love, and a lot of resources, to give me the choice to do anything but be an actor, to do something a little bit more secure, less peripatetic. And I threw it all back in their face by becoming an actor!”

He has managed to make them proud, and they let him know it early on.

“And there was this one moment in a car park after I’d played Salieri in ‘Amadeus’ at university. Dad sort of got hold of my shoulders and he went, ‘Look, you’re better at this than I ever was or ever will be. And I support you, and I can’t wait to see what you do.’

“I mean, yeah, every time I say that, I say – I get a lump in my throat. It’s such a huge thing for a man to say to his son, or for any parent to say to any child. And just to give that level of blessing, that ego-less love, it floored me. And that, and making both of them proud really, is a sort of essential ingredient to what motivates me day-to-day.”

Cumberbatch got an Oscar nod for “The Imitation Game,” as the British mathematician who helped crack the Nazis’ secret code. But lately he’s been playing a different kind of hero, in the Marvel Cinematic Universe.

“In just the sense that it’s comic book hero – “

“Not really. But I still think it needs integrity. It needs someone to be fully invested in trying to make a piece of make-believe, of here-and-now, of storytelling work in the moment.”

Cumberbatch expanded his storytelling powers with a production company. They did this year’s film about a Victorian artist who paints cats, “The Electrical Life of Louis Wain.”

But as the father of three small children with wife Sophie Hunter, he says he’s more selective about what he takes on.

“The priorities I have in my life, there’s nothing quite like my family in my work life,” he said. “So, whatever work, which is a huge deal, it offers me a great deal of life experience and opportunity, nothing, as anyone with children knows, compares to that.”

“No. Not really. It has to be very, very worthwhile for me to leave home.”

Of course, in acting, as in life, the most worthwhile ventures are often the toughest. Playing a cruel cowboy was both a physical and emotional hill to climb. But Benedict Cumberbatch sees all of it as a gift:

“You know, the gratitude of being able to do what you do, that you love doing, for a living, is just … I still pinch myself about it. Don’t tell producers, ’cause they’ll probably come to me with lower offers! But it’s the truth. It’s like, what a gig! What an amazing way to live a life.”

Benedict on doing ‘The Power of the Dog’

Benedict talks ‘The Power of the Dog” with IndieWire