In an interview for the Irish Times, Benedict spoke about creating a monster for Jane Campion’s new movie, working with her and his preparation for the role. Read more below:

Benedict Cumberbatch has played an anti-hero before, but his performance in Jane Campion’s acclaimed The Power of the Dog is the first time he’s created a monster

Benedict Cumberbatch is an actor who is just as likely to impress in the Marvel verse as he is on the boards in London’s fastest selling production of Hamlet.

He’s been thrilling as Alan Turing in The Imitation Game, hilarious as an incompetent airline captain in Radio 4 sitcom Cabin Pressure and complicated as Julian Assange (The Fifth Estate).

He’s played a dragon (The Hobbit), a monster (National Theatre’s Frankenstein) and The Grinch. But the London-born, Harrow-educated descendant of assorted British diplomats and aristocrats never pictured himself as a cowboy until Jane Campion’s The Power of the Dog came along.

“I didn’t have any boyhood fantasies of it,” he says. “It just wasn’t the reason I became an actor, for sure. I didn’t grow up in that culture. So maybe, you know, maybe if I’d been [Power of the Dog co-star] Jesse Plemons growing up in Texas on a ranch. But I certainly loved the idea of it when it was put to me. I mean, Jane Campion, I’d do anything for her. But that double whammy of her and her methodology and what I’ve seen in performances that have been given by other actors in her films, and then how important The Piano was to me when I saw it for the first time. And oh boy, she is something. I was pretty terrified, you know, of meeting this doyenne of cinema, this strong female force in this nightmarish, patriarchal world.

“Here’s someone who has inspired women and made them realise they have just as much place behind the camera, as any man does. You know, I was really a fan. And then I was just humbled by her. I really adored her. She’s so great and funny and direct. So that alone would have been enough, but then, this work I got to do as well.”

The very loud four-minute standing ovation for Campion’s period drama The Power of the Dog at Venice’s Sala Grande cheered, and culminated with a wave from Cumberbatch, who briefly de-masked to bow for the crowd and a group hug between the actor, director and Kirsten Dunst.

The warmth between the cast and crew of the gorgeous-looking western was not always a given. Speaking at the press conference, Dunst revealed that the on-set dynamics were “interesting” and that she and Cumberbatch, ordinarily a very charming fellow, did not speak during the shoot.

“We just talked over the weekend,” says the actor apologetically. “And we talked a lot during the lockdown, obviously, about our predicament and what we were going to do. And I think you know, she got it and I got it. We just had to do that. She had to create a real monster out of me. And, well, if I was nice, that would be a pretty hard road for her to walk. I definitely couldn’t ask her how that journey was going for her. For my sake as well.”

He smiles: “But we are good friends.”

Based on the 1967 novel by Thomas Savage, The Power of the Dog concerns a 1920s Montana farmer named Phil Burbank (Cumberbatch), who fumes and festers over the marriage of his brother George (Plemons) to Rose (Dunst), a widow who arrives on the ranch with her son, Peter, a delicate medical student (played by Kodi Smit-McPhee).

Cumberbatch has to date played plenty of caustic anti-heroes, from his Bafta-nominated performance as (his third cousin 16 times removed) Richard III in The Hollow Crown: The Wars Of The Roses to the wounded Patrick Melrose. But the fun, mordant barbs of Sherlock and Dr Stephen Strange – a part he will reprise in December’s Spider-Man: No Way Home – here give way to glowering malevolence. During one indelible, shocking sequence, Phil punches and swears at a horse.

“It’s a pretty strange thing, isn’t it?” says Cumberbatch. “To ask an audience to go along with someone who’s so violent and reactive and abhorrent. I mean, you can’t condone it. But you therapise with your character. You get to understand one another. And somehow, by the end, because of the reveal of who he really is and his betrayal of who he really is, it’s devastating. He’s a tragic figure.” Savage’s source novel, which was adapted for the screen by Campion, is more than 50 years old. And yet as the actor notes, the book’s themes of toxic masculinity, gaslighting and repressed sexuality feel very voguish.

“I don’t know if the book was ahead of its time or if it was just of its time,” says Cumberbatch. “And sadly, we are seeing the same things repeated over. People often ask me: why do you play so many characters and real people from the past? Because there’s not really that much difference between what happened then and what’s still happening now. It’s sad that’s still the case. And while it’s really important, I think that we’re platforming survivors and supporting them and listening rather than ‘mansplaining’.

“I also think it’s important to look under the bonnet and understand what makes this toxicity occur. It’s really important to understand monsters in order to stop them. We have to address masculinity. As well as looking at the damage toxic masculinity does to all around it. And it’s very clear in this film. It’s often less clear in the world. I mean, I think Donald Trump might have some mothering issues. She didn’t seem to love her son very much from what little I’ve read. But that might be the armchair-psychologist easy-fix answer.”

He laughs: “I’m not preparing to play Donald Trump in case you’re wondering.”

The Power of the Dog is Campion’s first feature since 2009’s Bright Star. Netflix gave her the biggest budget of her career in order to make the movie which was shot in New Zealand, with the southern region of Otago standing in for Montana.

It was an unusual production, says Cumberbatch, not least due to Covid-related interruptions. Cumberbatch, Dunst and Plemons all remained in New Zealand during the country’s lockdown.

It was unusual too, in terms of preparations. Cumberbatch and Smit-McPhee undertook a two-week boot camp at the director’s insistence, during which time she included some exercises that required them to stay in character. And another new frontier for Cumberbatch: dream journaling.

“I’ve never had such a long run into a film and I’ve never had such collaboration with the director for such a long period of time before shooting,” says the actor. “I would say it wasn’t so much rehearsal as just psyche work: finding out about each other and making a deeper connection because of that. We got along incredibly well immediately. And that means that you can really hit the ground running with confidence. But once she saw me as the character, she set about facilitating help for details about the character. I had to learn the banjo.

“And obviously, I want to do dude camp and try as many of the things that Phil does as a ranchman and alpha male of many years. But we did a different sort of psyche work with a dream analyst called Kim Gillingham. I had to keep a journal and write my dreams down. A wonderful, wonderful woman with great insights who made it very easy to step into that very odd terrain of working with your subconscious. Which is kind of what we actors do. So I can’t say it’s wishy-washy.”

When Cumberbatch finally arrived on set, he was introduced to the cast and crew as his character Phil. “You’ll meet Benedict at the end,” Campion told her set. “Benedict is really nice; this is Phil.” It was a daunting experience, he recalls, but it has produced a performance that is considered the frontrunner for next year’s awards season.

“I’m kind of a little apologetic, I talk too much and worry about what people think too much,” says Cumberbatch. “And there’s no space in Phil to be like that. And that was hard for the first day. I had this very loud voice in my head going: you know, you don’t deserve this. You don’t own this, you haven’t done enough work, and they don’t believe in you. You’re asking grown men and women to pretend you’re someone you’re not. What the f**k? But just silencing that voice is what the work is all about.” 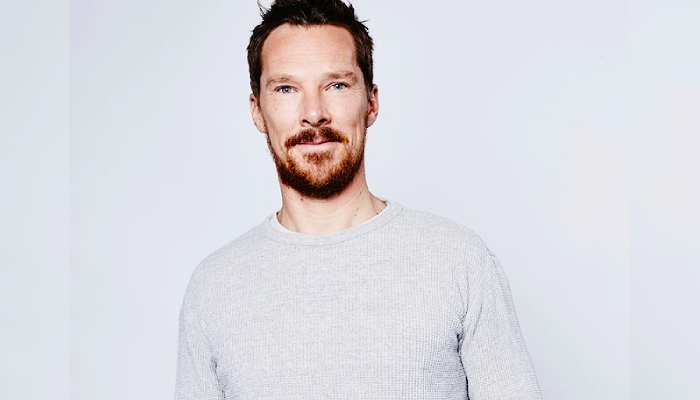 Benedict promotes ‘The Power of the Dog’ on BBC Radio