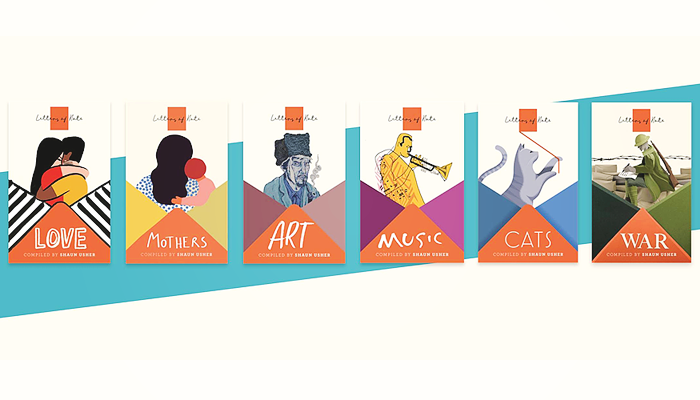 Six new volumes in the Letters of Note series organized by Shaun Usher are being released today by British publisher Canongate, each dedicated to one subject: love, art, music, mothers, cats or war.

They’re introducing the new Letters of Note paperback/ebook collection which is also being released in audio format, a first for the series. The audiobooks feature performances from Letters Live regulars like Benedict, who performs in all six. And to make things even better: Canongate will make a donation to the National Literacy Trust, one of Letters Live’s regular partner charities, for each audiobook sold!

Below you’ll find more information on the British editions. We decided to include their International Standard Book Numbers instead of links to any particular stores in an attempt to (hopefully) make things easier for you, so that you can look them up in whichever stores you prefer whether you live in the UK or not.

Also, we know of release dates in four other countries: Germany (already out), Canada (31 March), Australia (this month/next month) and the US (6 October)!

Audiobook: It’s an Audible (from any country, as far as we could tell) exclusive.