IndieWire just published an interview with Benedict and his The Power of the Dog costar Kodi Smit-McPhee about the movie and we think it’s a very interesting and important one however it’s about what is arguably the story’s most important development, its biggest revelation. So please, please beware there are definitely spoilers ahead!!!

Benedict Cumberbatch on Straight Actors Playing Gay in ‘Power of the Dog’: ‘It Wasn’t Done Without Thought’

Benedict Cumberbatch and Kodi Smit-McPhee are ready to have the hard conversations about “The Power of the Dog.”

Jane Campion’s evocative Western, which premiered to great acclaim in Venice and launched its cast into the Oscar race, brings a radical new perspective to its late-1920s backdrop. The adaptation of Thomas Savage’s novel finds Cumberbatch playing ruthless Montana cattle rancher Phil, who projects a crude, macho presence even as he develops unexpected chemistry with Peter (Smit-McPhee), the son of a widow (Kirsten Dunst) who moves onto the ranch after she marries Cumberbatch’s brother (Jesse Plemons).

“I feel very sensitive about representation, diversity, and inclusion,” Cumberbatch said in an interview out of the Telluride Film Festival, where he arrived from Venice. “One of the appeals of the job was the idea that in this world, with this specific character, there was a lot that was private, hidden from view.” While the specifics of Phil’s sexual identity are shrouded in ambiguity, Cumberbatch played a gay character in 2014 as the troubled mathematician Alan Turing in “The Imitation Game.” In the wake of that experience, he knows the score when it comes to the discourse surrounding which actors play certain roles.

“It wasn’t done without thought,” he said. “I also feel slightly like, is this a thing where our dance card has to be public? Do we have to explain all our private moments in our sexual history? I don’t think so.” He added that he trusted his veteran director, who wanted him for the part. “Jane chose us as actors to play those roles,” he said. “That’s her question to answer.”

Yet it’s Smit-McPhee who arguably faced the more daunting challenge with the role of Peter, a lanky, flamboyant young man whose physicality is itself a blatant challenge to the repressive heteronormative standards of the era.

“I would say that there’s a lot in Peter that I relate to,” said the 25-year-old actor, making his first pilgrimage to Telluride since his breakout turn in “The Road” made him a child sensation in 2009. “Sure, I’m a straight man, but I’m extremely in touch with my feminine side. I was raised by my mother and my sister. Of course, my dad has a huge masculine influence on my life but he could never really take me away from the feminine side that I just intrinsically have in myself. It was just a matter of bringing it out… and letting it be in the world. It was a really experimental but beautiful thing to do.”

Peter’s screen presence proved a fresh challenge for the young actor, who next plays Jimmie Rodgers in Baz Luhrmann’s upcoming Elvis Presley biopic. “One thing that really stood out with Jane is that she challenged me to get out of my comfort zone,” he said. “At first I was like, ‘I don’t know what I’m doing, I don’t know if I can find anything more than what I’ve done for all these years.’ But when I just surrendered to it and accepted it and had fun with it, Jane helped me bring more to Peter than I could bring myself.”

Smit-McPhee acknowledged that with early projects like “The Road” and “Let Me In,” he developed a dark streak that has followed him into his adult career. “Since that very young age, I’ve been very aware and conscious of the scripts that are coming in that speak to me,” he said. “I happen to have a lot of apocalyptic titles in my resume, but that wasn’t intentional.”

Sitting across from him, Cumberbatch echoed that sentiment. “You go with your taste,” he said. “You go with what you think will be a challenge. And your taste is about what you want to see.”

The actors developed their chemistry over the course of a two-week boot camp Campion arranged, during which time she included some exercises that required them to stay in character. “Of course we chatted with each other, but there was also some little secret sauce in there somewhere, the stuff you leave to the moment,” Cumberbatch said. “I think when it’s non-verbal and intensely subtextual, when there are so many planes of intention and thoughts going on, you obviously want to take the audience in. You want them to believe what they’re seeing, but you also want to leave something to discover.”

Netflix releases “The Power of the Dog” in theaters on November 17, 2021, before it streams beginning December 1. 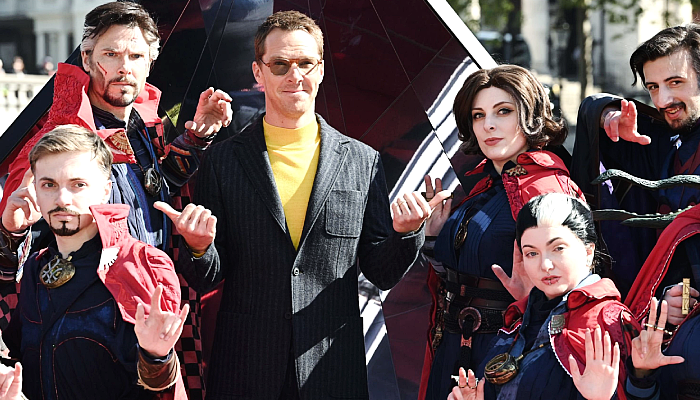