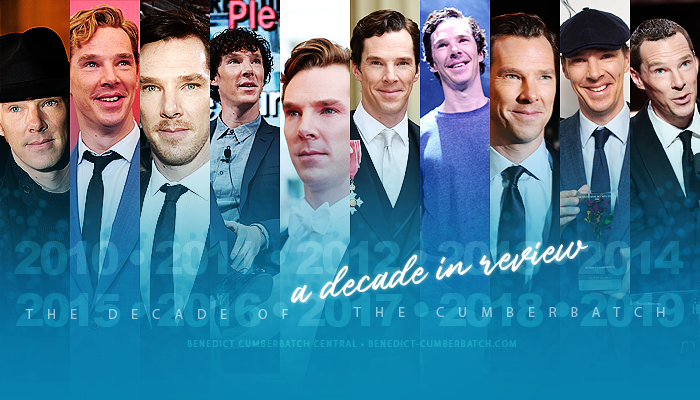 Saying the 2010s were a life-changing decade for Benedict Cumberbatch might be an understatement. It was in the last 10 years that his career took an unexpected turn and decided to turn him from a working actor into a Marvel superhero, Oscar nominee, Emmy and BAFTA-winning A-List superstar. Although Benedict is a private person, his personal life seems to have gone the same way: it was on the second half of this decade that Benedict got engaged and married to Sophie Hunter, having three children.

And that’s why we decided to make a Decade in Review. Because this decade was so important to Benedict and he has done and conquered so much that we think it should be celebrated and remembered as it deserves. We’ll focus on the most important bits so the posts won’t get too long, but we hope its intended purposes are met and that we all cherish all those unforgettable moments that probably had been important not only to him but to the fans as well.

The Decade of the Cumberbatch is a two-part special made by Benedict Cumberbatch Central to cherish those unforgettable years and to look forward for the years that are about to come.

Read the special clicking on the links below:

“The Decade of the Cumberbatch”; a decade in review — Part 1

This part covers the first half of the decade, from 2010 to 2014, and talks about Benedict’s most well-known projects such as Cabin Pressure, After the Dance, Frankenstein, Parade’s End, Star Trek: Into Darkness, The Imitation Game and that little show called Sherlock.

“The Decade of the Cumberbatch”; a decade in review — Part 2

This part covers the second half of the decade, from 2015 to 2019, and talks about Benedict’s most well known projects like Hamlet, The Current War, The Child in Time, The Hollow Crown: The War of The Roses, the final series of Sherlock, his journey on the MCU as Doctor Strange, and Patrick Melrose, which earned him his first BAFTA after 8 nominations and 14 years.